Prof. Chossudovsky’s incisive analysis sheds much needed light on the increasingly topical issue of weather manipulation. As temperatures in many European countries soar to unnatural heights, the nature of the “global warming” narrative must be carefully reassessed.

US mathematician John von Neumann, in liaison with the US Department of Defense, started his research on weather modification in the late 1940s at the height of the Cold War and foresaw ‘forms of climatic warfare as yet unimagined’. During the Vietnam war, cloud-seeding techniques were used, starting in 1967 under Project Popeye, the objective of which was to prolong the monsoon season and block enemy supply routes along the Ho Chi Minh Trail.

The US military has developed advanced capabilities that enable it selectively to alter weather patterns. The technology, which was initially developed in the 1990s under the High-frequency Active Auroral Research Program (HAARP), was an appendage of the Strategic Defense Initiative – ‘Star Wars’. From a military standpoint, HAARP  –which was officially abolished in 2014– is  a weapon of mass destruction, operating from the outer atmosphere and capable of destabilising agricultural and ecological systems around the world.

Officially, the HAARP program has been closed down at its location in Alaska. The technology of weather modification shrouded in secrecy, nonetheless prevails. HAARP documents confirm that the technology was fully operational as of the mid 1990s.

(For further details see Michel Chossudovsky, The Ultimate Weapon of Mass Destruction: Owning the Weather for Military Use, first published by Global Research in 2006).

It should be emphasized that while the US military confirms that weather warfare is fully operational, there is no documented evidence of its military use against enemies of the US. The subject matter is a taboo among environmental analysts. No in-depth investigation has been undertaken to reveal the operational dimensions of weather warfare.

The irony is that the impacts of ENMOD techniques for military use were documented by CBC TV in the mid 1990s.

The CBC TV report acknowledged that the HAARP facility in Alaska under the auspices of the US Air Force had the ability of triggering typhoons, earthquakes, floods and droughts: .

Directed energy is such a powerful technology it could be used to heat the ionosphere to turn weather into a weapon of war. Imagine using a flood to destroy a city or tornadoes to decimate an approaching army in the desert. The military has spent a huge amount of time on weather modification as a concept for battle environments. If an electromagnetic pulse went off over a city, basically all the electronic things in your home would wink and go out, and they would be permanently destroyed.”

“Weather as a Force Multiplier: Owning the Weather”

In this article we will provide key quotations from a US 1996 US Air Force document which analyzes weather modification techniques for military use.

The underlying objective from a military standpoint is “Owning the Weather”.

At the time this study was commissioned in  1996, the HAARP program was already fully operational as documented by the CBC documentary.

The stated purpose of the Report is described below:

In this paper we show that appropriate application of weather-modification can provide battlespace dominance to a degree never before imagined. In the future, such operations will enhance air and space superiority and provide new options for battlespace shaping and battlespace awareness there, waiting for us to pull it all together;” in 2025 we can “Own the Weather.” (Commissioned by US Air Force document AF 2025 Final Report,  (public document) 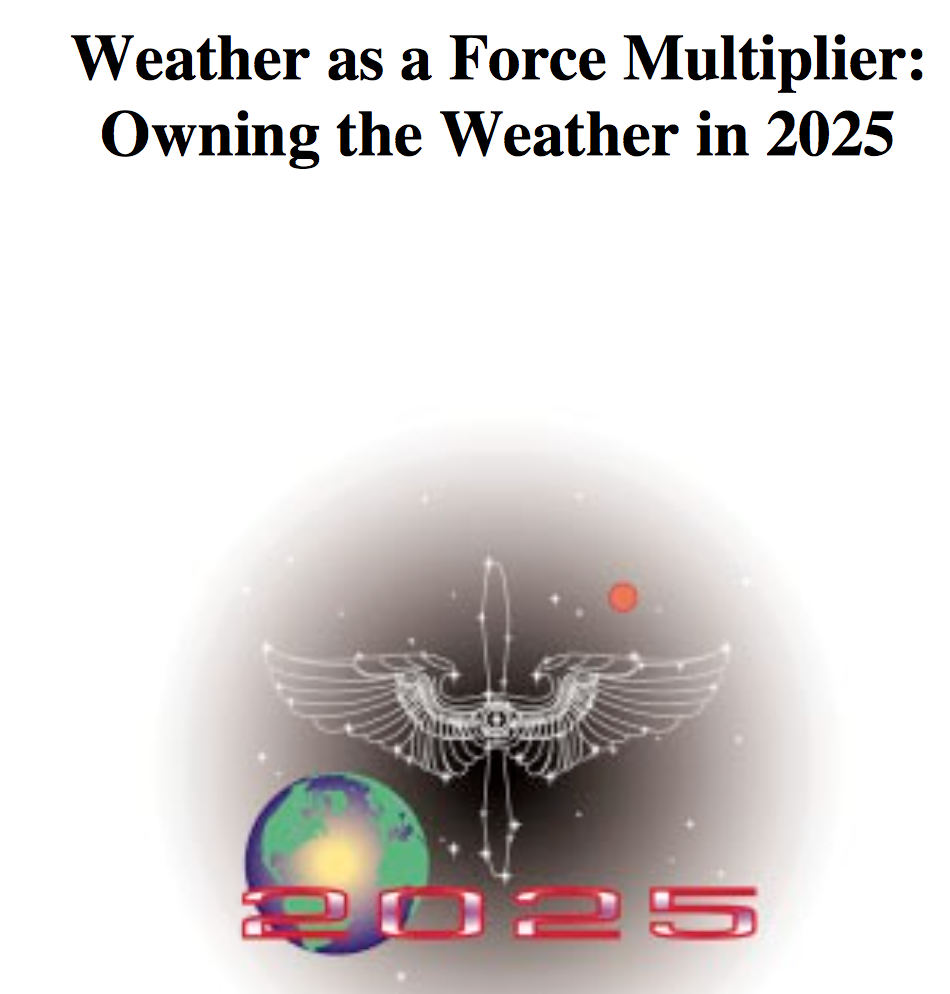 Weather-modification, according to US Air Force document AF 2025 Final Report,

“offers the war fighter a wide range of possible options to defeat or coerce an adversary”, capabilities, it says, extend to the triggering of floods, hurricanes, droughts and earthquakes:

‘Weather modification will become a part of domestic and international security and could be done unilaterally… It could have offensive and defensive applications and even be used for deterrence purposes. The ability to generate precipitation, fog and storms on earth or to modify space weather… and the production of artificial weather all are a part of an integrated set of [military] technologies.” 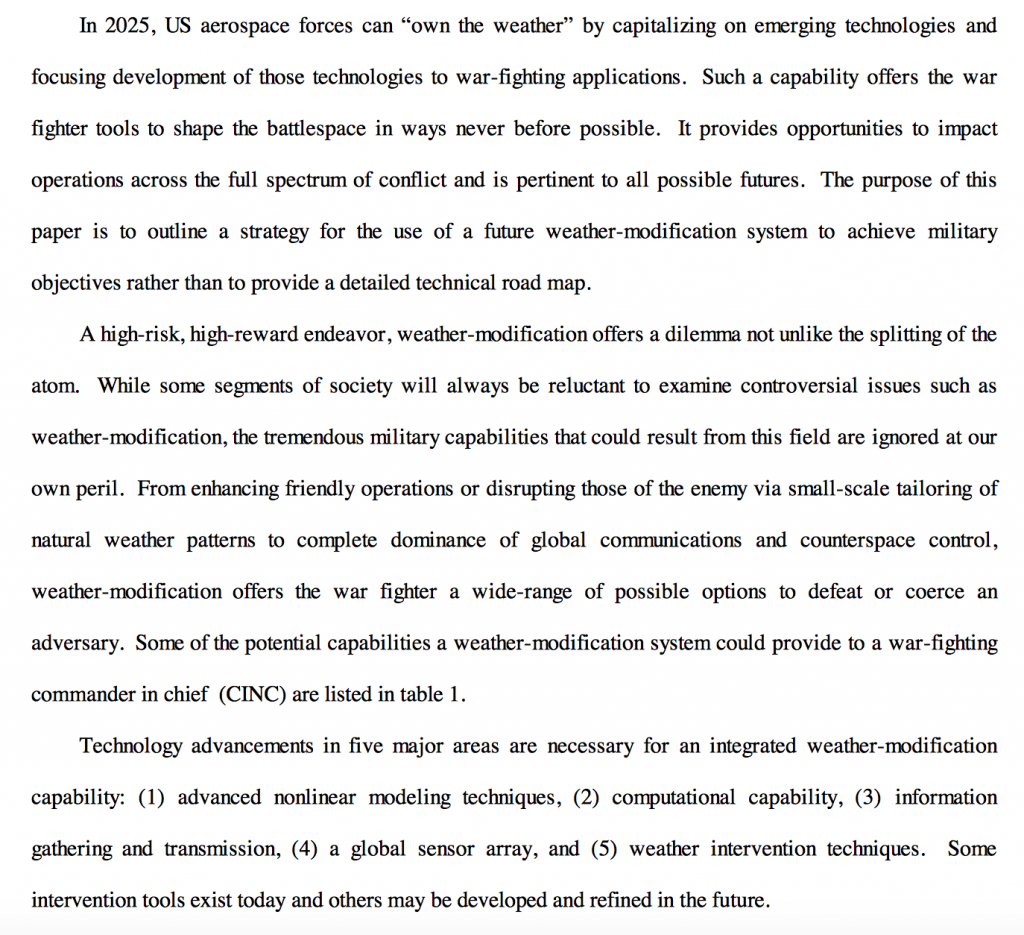 See complete reports commissioned by the US Air Force

….From enhancing friendly operations or disrupting those of the enemy via small-scale tailoring of natural weather patterns to complete dominance of global communications and counterspace control, weather-modification offers the war fighter a wide-range of possible options to defeat or coerce an adversary. Some of the potential capabilities a weather-modification system could provide to a war-fighting commander in chief (CINC) are listed in table 1. 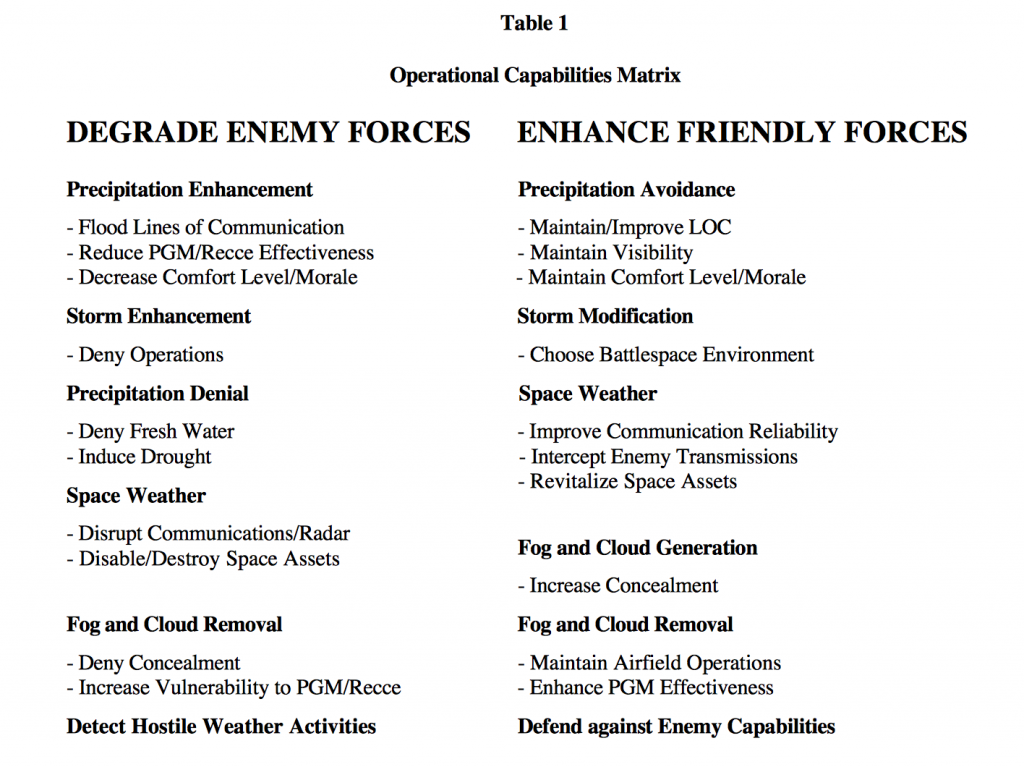 Why Would We Want to Mess with the Weather? is the subtitle of chapter 2 of the Report

“According to Gen Gordon Sullivan, former Army chief of staff, “As we leap technology into the 21st century, we will be able to see the enemy day or night, in any weather— and go after him relentlessly.” global, precise, real-time, robust, systematic weather-modification capability would provide war-fighting CINCs with a powerful force multiplier to achieve military objectives. Since weather will be common to all possible futures, a weather-modification capability would be universally applicable and have utility across the entire spectrum of conflict. The capability of influencing the weather even on a small scale could change it from a force degrader to a force multiplier.”

What Do We Mean by “Weather-modification”?

“The term weather-modification may have negative connotations for many people, civilians and military members alike. It is thus important to define the scope to be considered in this paper so that potential critics or proponents of further research have a common basis for discussion.

In the broadest sense, weather-modification can be divided into two major categories: suppression and intensification of weather patterns. In extreme cases, it might involve the creation of completely new weather patterns, attenuation or control of severe storms, or even alteration of global climate on a far-reaching and/or long-lasting scale. In the mildest and least controversial cases it may consist of inducing or suppressing precipitation, clouds, or fog for short times over a small-scale region. Other low-intensity applications might include the alteration and/or use of near space as a medium to enhance communications, disrupt active or passive sensing, or other purposes.” (emphasis added)

The Triggering of Storms:

Critical to the success of any attempt to trigger a storm cell is the pre-existing atmospheric conditions locally and regionally. The atmosphere must already be conditionally unstable and the large-scale dynamics must be supportive of vertical cloud development. The focus of the weather-modification effort would be to provide additional “conditions” that would make the atmosphere unstable enough to generate cloud and eventually storm cell development. The path of storm cells once developed or enhanced is dependent not only on the mesoscale dynamics of the storm but the regional and synoptic (global) scale atmospheric wind flow patterns in the area which are currently not subject to human control.” (page 19)

Is the CIA involved in Climate Engineering?

The Involvement of the CIA in Climate Change Technologies

Back in July 2013,  MSN news reported that the CIA was involved in helping to fund a project by the National Academy of Sciences (NAS) focusing on geo-engineering and climate manipulation. The report not only acknowledged these technologies, it confirmed that US intelligence has been routinely involved in addressing the issue of climatic manipulation:

“The CIA is helping fund the research because the NAS also plans to evaluate “the national security concerns (that could be) related to geoengineering technologies being deployed somewhere in the world,” Kearney said.

In an emailed statement, Christopher White, a spokesman for the CIA’s office of public affairs, told MSN, “On a subject like climate change, the agency works with scientists to better understand the phenomenon and its implications on national security.”

Although the CIA and the NAS are tight-lipped about what these concerns might be, one researcher notes that geoengineering has the potential to deliberately disrupt the weather for terrorist or military goals.

John Pike, the director of GlobalSecurity.org, a Washington-based firm that specializes in addressing emerging security concerns, says that worries about the potential impact of geoengineering aren’t as paramount as the potential security issues that could arise if the United States doesn’t use the technology.

“A failure to engage in geoengineering could impact the political stability of other countries, and that could lead to trouble for the U.S.,” he said.

“historical examples of related technologies (e.g., cloud seeding and other weather modification) for lessons that might be learned about societal reactions, examine what international agreements exist which may be relevant to the experimental testing or deployment of geoengineering technologies, and briefly explore potential societal and ethical considerations related to geoengineering. This study is intended to provide a careful, clear scientific foundation that informs ethical, legal, and political discussions surrounding geoengineering.”

According to a  2015 report in the Independent (screenshot above), quoting a renowned US scientist Alan Robock:

“A senior American climate scientist has spoken of the fear he experienced when US intelligence services apparently asked him about the possibility of weaponising the weather as a major report on geo-engineering is to be published this week.

Professor Alan Robock stated that three years ago, two men claiming to be from the CIA had called him to ask whether experts would be able to tell if hostile forces had begun manipulating the US’s weather, though he suspected the purpose of the call was to find out if American forces could meddle with other countries’ climates instead.”