Talk about “malign influence” in the Balkans! A distinguished Serbian academic, historian Dr. Miloš Ković, is fighting for his professional life with few seeming to notice. A NATO controlled cabal entrenched in the Department of History at the University of Belgrade is pulling strings to prevent his appointment to full professor, although Dr. Ković amply satisfies all requirements, and it is working assiduously to ultimately oust him altogether from the faculty. It had earlier managed to dismiss three of Dr. Ković’s academically promising like-minded colleagues.

Dr. Ković’s “sins” are from the point of view of his detractors manifold and on the face of it they fully justify his persecutors’ vengeance. He is publicly on record as an opponent of the fabricated history of Serbia and the Balkans that was generated by the Hague Tribunal through its contrived verdicts. He is also boldly swimming against the current by  rejecting the de rigueur characterisation of Srebrenica as “genocide.” And he has infuriated the dominant establishment as well as colleagues on NATO and Western “NGO” payrolls by insisting that occupied Kosovo is an inalienable part of Serbia. Impudently, he teaches that Kosovo is Serbia’s religious and cultural heartland, and he frequently takes his history students there to observe the evidence for themselves, in the form of innumerable Serbian monuments which dot it.

With such odd views, it is no wonder that Dr. Ković’s professional agony has not been noticed by the „New York Times“ nor been the subject of indignant denunciations by the usual gaggle of organizations that unfailingly react to the slightest violation of „human rights“ or infringement of „academic freedom“ in even the remotest corner of the globe.

Quite the contrary, Ković’s ideas qualify, without exception, as unpardonable thought offences that thoroughly enrage the paladins of “diversity” and “open society.” True to form, the chairman of the history department where Ković has been teaching, Prof. Nikola Samardžić, appointed a commission, riddled with conflicts of interest, assigning it the suspected task of glossing over Dr. Ković’s sterling qualifications and blocking his appointment to full professor. Incidentally, Prof. Samardžić has been virtue signalling his allegiances for some time by referring to the Serbian people  (from whose governmental budget he is salaried) as unwashed „scum“ which had coming to it the mass extermination in satellite Croatia’s World War II Jasenovac concentration camp that claimed hundreds of thousands of lives.

While understandably painful for the targeted individual, the broader context of this intellectual suppression campaign is equally important. It is the effort to fully dominate discourse and thinking in the politically and economically conquered territories, and amongst the younger generation in particular. It is a multilevel project starting with the interdiction of information that challenges coloniser-approved narratives. The youth are, naturally, a prime target in this no quarter war for the control of purposefully zombified human minds, preferably emptied of knowledge and certainly deprived of the faculty of critical analysis. Such is the profile of the ideal helots of the order that is being constructed. Non-party line teachers such as Dr. Ković are simply not allowed to interfere with the dumbing-down process.

So the Ković affair, as shameful an example as it is of ruthless trampling by Western – and why not say it openly? – NATO minions in Serbia of every known principle of academic integrity, including the sacrosanct canon of diversity that Transatlantic hypocrites relentlessly preach to others, is about much more than just a single individual. If these principles were sincerely held, instead of serving rather as mere weapons in the arsenal of political warfare, the undeserved torments of this outstanding, Oxford-educated Serbian academic, opposing almost single-handedly the tidal wave of NATO-sponsored garbage education in his country, would be front-page news in the farthest reaches of the “free world.”

Instead, it is an ignored scenario that nevertheless keeps repeating itself in one institution of higher learning after another throughout the still captive nations of Eastern Europe.

As Ković correctly puts it, at stake is not just his own future as an educator, but an issue that should be of transcendent importance for society in general: who will shape our children’s perception of their own past? Obviously, and without even having to refer to Orwell explicitly, whoever seizes the power to do that will also largely determine the future that those suggestible young souls will be allowed to have.

So far, a respectable number of colleagues from various university departments have rallied to Dr. Ković’s cause and expressed support, many at some cost to their own position in a fragile land dominated by the not so soft but certifiably malign influence of its Western ill-wishers. Among the most hopeful signs that in the end the Belgrade History Department cabal’s plans may be thwarted is a rally in support of the beleaguered Dr. Ković, organised the other day by several hundred students who admire his academic excellence and unflinching integrity. 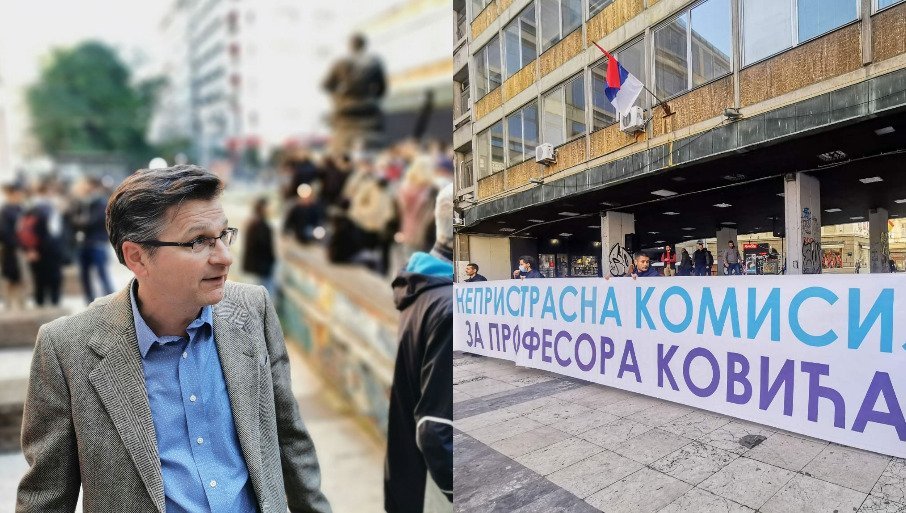 The news may not have made “The New York Times,” London “Guardian,” “Le Monde,” or CNN (regrettably not even RT as far as it is known) but it is sure to be noted with some chagrin by both the instigators and their foreign puppeteers.

They have made some strides but still have a very long way to go before finally congratulating themselves on successfully flushing the brains and emptying the minds of Serbia’s intellectual youth.