Way back, American Ambassador to Ukraine John Tefft rather frankly expressed the following reaction to the Ukrainian anthem in a report to his chief – the US Secretary of State: “It was especially impossible to listen to their anthem.  It’s like some kind of torture!  They are like a chorus: ‘Ukraine has not died yet’ …  It looks like you are being buried alive.  Some kind of oppressive, heart-breaking melancholy attacks, that sometimes it seems that flies are dying in the area from this howling.  Listening to this howl is so unbearable that at times it seemed that it would be easier to die.”

These are most unkind words from a foreign diplomat accredited to the very country whose anthem he is indelicately comparing to a howl. Nevertheless, in the admiring West, clearly bedazzled by all things Ukrainian, the noble howl is now tous la rage. (Also here, here, and here, and we could go on ad infinitum.) Granted that it is not exactly a tune you would whistle while taking a shower, the ambassador may have been a bit harsh in his judgment. But one may safely bet that the forgettable melody no one had ever listened to before, which suddenly popped up out of nowhere after February 24, will just as abruptly again be consigned to oblivion, as soon as it becomes politically redundant.

Varying assessments of the Ukrainian anthem’s musical merits aside, however, vastly more significant issues have emerged as a direct consequence of the recently launched ruthless campaign to nullify Russia. The truly grave situation we are now facing is not the preposterous promotion of Ukraine’s mediocre hymn as the new gold standard of musical perfection. It is the aggressive war on conscience, the brutal assault on moral autonomy waged by an unhinged West in unabashed contravention of its most cherished nominal “values.”

The terror waged on artists and even sports figures to compel them to take political positions as a condition for performing publicly in their respective domains, exemplified by the “cancelling” of elements of universal cultural heritage completely unrelated to current events, such as the course on Dostoyevsky in Italy and the puerile renaming of Degas’ canvass to mollify Ukrainian snowflake sensibilities, is without precedent in the civilised world. The conflict in the Ukraine will be settled and pass, but the ugly, vindictive head of the moribund hegemon that has now been reared will remain embedded in the collective memory of generations to come as stark evidence of the perversity of empires too terminally ill to accept that their time is up.

To the mind of this writer, the torments visited upon two artists who could not be farther removed from war and politics, opera singer Anna Netrebko and twenty-year-old piano prodigy Alexander Malofeev, illustrate comprehensively the tormentors’ descent into madness. Netrebko (and her colleague, the similarly “sanctioned” conductor Gergiev) were after February 24 ostracised simply for being “too close” to you-know-who. The vague accusation was sufficient for their artistic engagements in the democratic West to be abruptly cancelled. For an approximate parallel, one needs to go back to another era and look at the banning of Pasternak, an arbitrary act which in its day justifiably outraged the institutional precursors of those who today avidly approve and cheer on identical procedures designed to crush the spirit of nonconformist artists.

Ms. Netrebko’s “closeness” to whoever is a concept that was left deliberately fuzzy so that she could more easily be smeared by association, but it is irrelevant because it is completely unrelated to her vocation and casts no reflection on her talent as an opera singer. Similarly for Malofeev. His scheduled appearance in Montreal was to play for the Canadian audience piano works by Prokofiev, something at which he excels, and not to promote any agenda extraneous to his vocation.

But there’s the rub, as they say. The banning of artists for ideas that merely by virtue of their ethnicity they are suspected of harbouring in their minds, formerly rightly regarded in the Free World as a cardinal infraction, while the West considered it necessary to distinguish itself from its ideological competitors, has now apparently been normalised where once it was abhorred. And that in itself would be bad enough. But as it turns out, the broader reality is actually much worse.

Not only are penalties now to be paid for ideas imputed to you, but you must additionally engage in incessant public protestations of “innocence” accompanied by plausible assurances of thoroughgoing metanoia. You must strive to appease your tormentors with at least the public appearance of complete thought reform, in the uncertain hope of being reinstated and returned to their good graces.

What once futuristic (and now realistically descriptive) novel does this remind one of?

It is not precisely known what Ms. Netrebko’s views on geopolitics might be, or even if she has any. It is even less certain that the twenty-year-old child prodigy Alexander Malofeev espouses any such views. His entire life since he was a toddler, knowing the rigorous discipline of Russian artistic institutions, must have revolved exclusively around piano-playing, leaving no time for movies, social life, analysis of political issues, or anything else apart from the drudgery of endless piano practice. And why should it matter to anyone, anyway?

Perhaps the tormentors should be reminded of a provocative thought by America’s once celebrated (and now long forgotten) longshoreman-philosopher Eric Hoffer, which encapsulates perfectly what not just America, but the entire collective West, once upon a time stood for:

“The basic test of freedom,” wrote Hoffer in The Passionate State of Mind, “is perhaps less in what we are free to do than in what we are free not to do. It is the freedom to refrain, withdraw and abstain which makes a totalitarian regime impossible.” Well said. Is anyone listening?

The freedom to refrain, withdraw, and abstain is under relentless attack in the collective West today. The real venue and the ultimate target of the war that is being waged today is not Ukraine, it is the defenceless human conscience.

The right to be left alone, in fact, is the quintessential, overarching human freedom that encompasses all the others. It is, precisely as Hoffer pointed out, the antithesis of totalitarianism. In a bygone, more honest era this self-evident truth used to define the stance and moral status of the West in relation to its enemies and detractors. But the West of today has made its opponents’ odious practices its own. Its bamboozled denizens are too brain dead to notice or to care, but the rest of the world is not fooled and it is watching.

With all due respect for Ms. Netrebko and Alexander Malfeev, they are not the real heroes of this tale. They are merely its hapless victims because in the end they both did succumb to temptation and ritually prostrated themselves before their tormentors, insincerely and unwillingly perhaps. But they did it nonetheless, in the corrupt hope, no doubt, that by such an act of self-debasement they might still be rehabilitated and offered an opportunity to perform in their respective fields of art in lands where regardless of what they do they and their country are held in utter contempt. That naturally begs the question of why it was so important to them to perform in the realm of their country’s adversaries, when their own vast country with its cultured audiences would have continued to offer them every opportunity they might have dreamt of to display their virtuosity and reach new heights of stellar perfection. This is a question that only they can answer and they should be encouraged by their compatriots to do so without delay.

But yes, there is an unsung hero in all of this. His name is Ivan Kuliak. Ms. Netrebko should be singing arias to him, and Alexander Malofeev should be dedicating canticles to his slightly younger peer. At the Gymnastics World Cup competition in Doha on March 5, Ivan was not allowed to display the colours and emblems of his country, so for the awards ceremony where he was to receive the bronze medal he defiantly pasted to his T-shirt the proscribed letter “Z”. 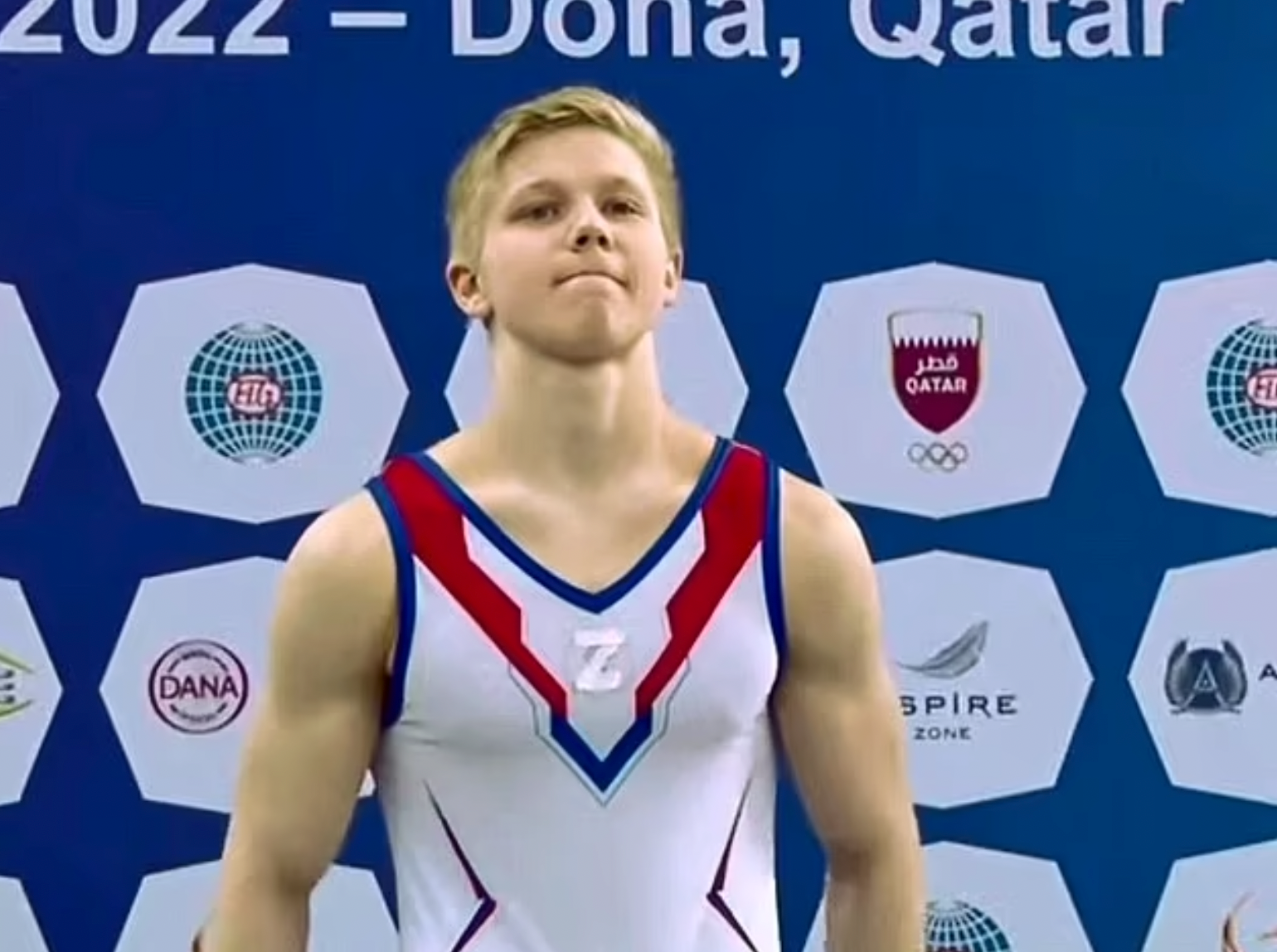 From the mouths of babes, indeed… The indomitable courage, pride, and quiet dignity of this boy, in contrast to the wishy-washiness of his elders and presumed betters, sends a rousing message of hope to all who despairingly feared that the boot would be stamping on the human face – forever. As far as it depends on Ivan, it won’t. By refusing to bend and compromise his honour, in this case by prostituting himself for an invitation to the next gymnastic competition, which now he is assured never to receive, Ivan acted out as an archetypal figure on behalf of his entire nation.

And by doing so, he became also the standard by which integrity shall be recognized and measured, everywhere.